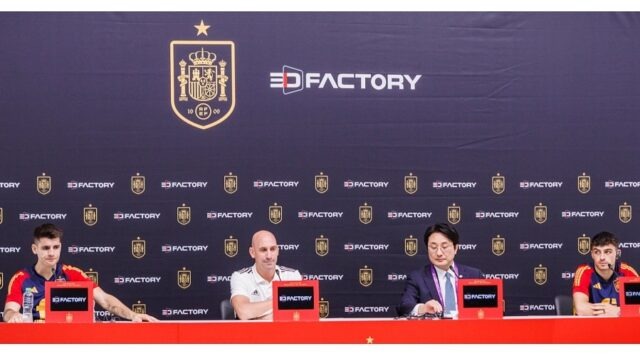 The Royal Spanish Football Federation (RFEF) and the Spanish team will enter the new world of the metaverse after the agreement reached with '3D Factory', world leader in the development of ultra-realistic metaverses, and presented this Monday in Qatar.

In this way, the South Korean company becomes the main sponsor of the RFEF and will be in charge of developing the metaverses of the absolute male and female teams, making it the first international soccer federation with its own Metaverse.

“This initiative will revolutionize the relationship with fans, and will serve as a meeting point for fans from all over the planet. Millions of fans who, regardless of their location, will be able to immerse themselves whenever they want through different devices in an immersive space to interact, have fun and even put themselves in the shoes of the team members. It will also allow us to follow and encourage the national team in all its matches", they indicated from the RFEF.

In addition, and as a result of this agreement, Spanish football will be internationalized with the establishment in Asia of football schools of the national team, and of the Spanish teams of the Copa del Rey and the Spanish Super Cup competitions.

The agreement will begin to be developed immediately and will allow any facility to which the RFEF has rights to be recreated in a virtual space, and within which users will be given infinite opportunities, both to customize their appearance and to carry out all kinds of virtual actions. .

Each registered user will keep the identity of their avatar or avatars with human quality, which may be personalized with the identity of all the players of the national team or with any of the teams participating in the Copa del Rey and the Spanish Super Cup.

Once immersed in this RFEF Metaverse, which is accessed by downloading the 'app' available in the Apple, Google and Huawei AppGallery 'stores', fans will be able to communicate by voice and without language restrictions, since it includes a unique instant translation system, compete in attractive games and even carry out transactions or purchases of real or non-fungible products (NFT) from the entity or clubs participating in these competitions.

“We are very happy, it is an important day because the pillars of the RFEF are based, among other things, on being up to date in innovation and having pioneering and higher-level companies such as those of South Korea. '3D Factory' are the number one in the metaverse and we have signed until 2027, although we hope there will be more,” Rubiales said at the presentation of the agreement where he was accompanied by the internationals Álvaro Morata and Pedri González, and by the president of the South Korean company , Brian Oh.

The footballers and the manager were asked about the facet as a 'streamer' of the coach Luis Enrique Martínez, something they welcome. "We had lots of fun. I think you already know him for how he is in the press room, and he is so direct and close that it helps a lot to all the fans around the world, who can be directly with a 'top' coach of a great team ”, Rubiales indicated.

Morata made it clear that he did not think it was "bad" because the coach "resolves small doubts as naturally as possible", while Pedri sees it as "good". “I always try to see him and I laugh a lot with his answers. The coach is that spontaneous and it is a facet that he is enjoying", he admitted.

Twitter | Telegram | Instagram
Blockchain Games list | NFT Games lists | Crypto Games list | Play to Earn Games List
0
Bookmark
0
Like
Related articles
Take-Two asks MyMetaverse to take down its NFTs in GTA servers
Take-Two’s legal policy, it would not allow business exploitation. Players are also not allowed to generate revenue from their servers via in-game integrations or corporate sponsorships.
0
BMW Venturing into NFTs and Metaverse
These items are supposed to be used in extended virtual reality environments. Users could potentially simulate the operation of land vehicles with the help of their VR headsets or glasses.
0
HitBox Games raises $1.6M for hack’n’slash Web3 game Swords of Blood
Swords of Blood is the Web3 expansion of a previously successful Web2 game, Blade Bound. Swords of Blood intends to combine both Web2 and Web3 in a seamless way.
0
NFT Investor Animoca Brands to Start $2B Metaverse Fund: Report
The company will unveil the fund, called Animoca Capital, with plans to make its first investment next year.
0
Meta ‘powering through’ with metaverse plans despite doubts — Zuckerberg
Billions of dollars have been poured into Meta’s virtual world with little return on investment, but CEO Mark Zuckerberg says he is holding fast.
0
Aeria Studio Canada partners with Ready Games to bring Web3 titles to Android
Aeria Games is joining the push to Web3 and making these titles more accessible by re-releasing them on the Android mobile operating system.
0
Curto News creates news channel to cover the metaverse
The project, created by Leo Burnett TM, aims to democratize access to the virtual world and make the topic more accessible
0
Sony Makes A Fresh Move In Metaverse With Affordable Set of Wearables
The Mockpit kits launched by Sony will help users on Android and iPhone experience the fun of Metaverse in an affordable manner
0
Polkastarter to Host Web 3.0 Game Awards Show, Nominates Over 200 Games
Web3 Gaming Launchpad Polkastarter Gaming has announced it is holding its first annual game awards show, GAM3, on December 15th.
0
The Sandbox opens new virtual neighbourhoods with 14 major brand partners with three LAND sales
LAND owners in any one of these neighbourhoods will have the power to create new gaming experiences centred around three new themes.
0