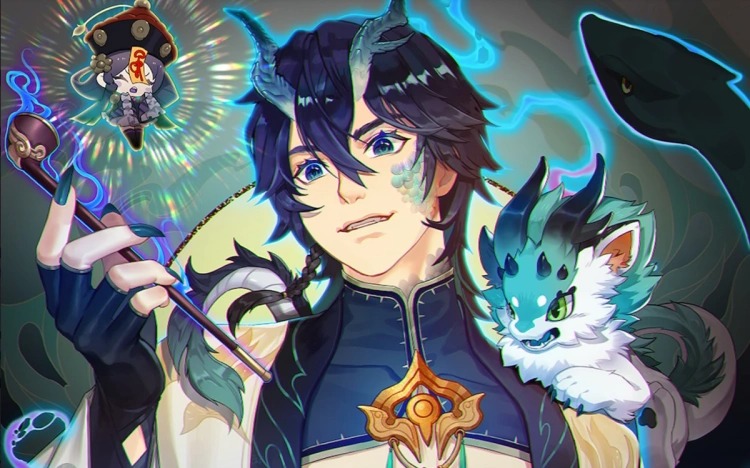 Gabe Leydon, CEO of Limit Break, wants to make history with his next television commercial for the Super Bowl.

Fresh from raising $200 million for his blockchain gaming company, Leydon announced in October he planned to spend $6.5 million on a Super Bowl ad for Limit Break’s first game based on its DigiDaigaku NFT game.

And now he said in an interview with GamesBeat that the commercial will include a QR code so that players can use it to apply for a free NFT mint. Limit Break will be giving away a limited number of NFT-based dragon characters through the Super Bowl commercial QR code.

“We’re doing an extremely small collection, especially compared to the audience — something like 50 million people are going to see the commercial,” Leydon said. “There will be a QR code on screen. And anybody can scan it and then mint an NFT from the DigiDaigaku collection. I think this is going to be a really big deal because I think it’s going to change television advertising.”

The ad will run during Super Bowl LVII on February 14, 2023. The free mint will allow a limited number of viewers of the Super Bowl ad to receive one of an extremely limited supply of free NFTs. It will be a highly exclusive event where only lucky viewers who are quick at the draw will obtain a free DigiDaigaku Dragon NFT, Leydon said.

He believes it will be the most highly anticipated free NFT minting event in history. Leydon has done Super Bowl commercials before. He and his Limit Break cofounder Halbert Nakagawa were also the founders of Machine Zone.

While CEO of Machine Zone, Leydon ran a couple of Super Bowl ads for the games Game of War: Fire Age and Mobile Strike. Those ads starred model Kate Upton and actor Arnold Schwarzenegger, and Leydon said that was the best marketing the company ever did as people remembered the ads for years.

The company espoused a “free-to-own” business model where it gave away its DigiDaigaku non-fungible token (NFT) collection of anime characters. It posted multiple free collections already.

Leydon said the campaign will add a new dimension of viewing TV for Web3 advertising. Last year, Coinbase did a giveaway where it used QR codes in a Super Bowl commercial, giving away some Bitcoin to anyone who signed up for an account.

“I’m pretty excited about it,” he said. “Nobody [in Web3] has done it this way on television before. The point of it is to get a digital asset, and they’re going to be extremely rare and hopefully collectible as a result.”

Such giveaways are common in Japan, but not so much with Web3 in the U.S. where gamers have often viewed NFTs with derision. Of course, a lot of people may be unhappy if they don’t win the digital items in the giveaway, as Limit Break will only give away tens of thousands of items, but many more people will see the ad with the QR code.

But Leydon is confident.

“I think this is going to be the norm on television after we’re done. Because why wouldn’t you?” he said. “Why wouldn’t you put digital collectibles in your ads?”

Limit Break has already given away its DigiDaigaku female and male hero characters in previous giveaways. This time, it will be giving away dragons. Leydon said the company is still working out some details like whether players need a digital wallet to receive the NFTs. Partners working in the background will try to make it a seamless experience, he said.

“We want Limit Break to be one of the pioneers integrating Web3 into its marketing,” Leydon said. “It’s going to be a revolutionary experience.”

Some naysayers have pointed to the crypto winter and the weak economy as reasons to be cautious. But Leydon said, “We feel justified because what we’re doing is radically different. Everybody thinks we’re making a video ad. We’re creating a worldwide Web3 event in real time. That has not been done before.”

Will this kind of content appeal to the masses? Leydon said the company is putting game assets out before the game comes out, and he believes they will be popular based on the reaction so far.

“There are going to be a lot of NFTs out there and a lot of Web3 games out there,” he said. “We want to differentiate ourselves as a premier studio with NFTs that people want.”