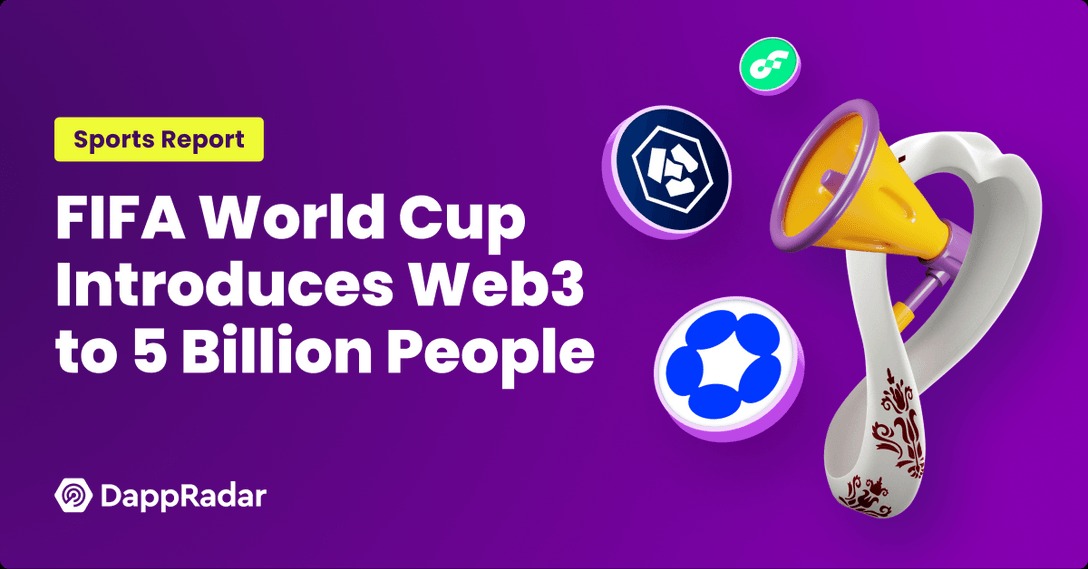 The potential of blockchain in the sports world is significant. Web3 esports aims to become a tool for mass adoption.

For the next six weeks, the world’s eyes will be on one place: Qatar 2022. The World Cup is one of the few global phenomena where all nationalities, races, ideologies, or religions can come together. It is the world’s most-watched sports event, drawing 3.5 billion viewers worldwide during the 2018 edition. That figure is expected to surpass 5 billion over the next six weeks. However, this year, in Qatar, Web3 will connect with more than half the world’s population through sponsorships, advertisements, and interactive experiences.

Football is the most popular sport in the world, and the World Cup will provide blockchain with unprecedented exposure and visibility. Cristiano Ronaldo is the most followed person on Instagram, while Messi and Neymar have a social reach in the millions. But the story between Web3 and football started long ago.

Every week, the players select their top players to collect points based on each performance. Sorare gives gamers an intimate experience managing a real-life sports team, unlike popular fantasy sports platforms.

Over the last 30 days, Sorare is the second-largest NFT collection in terms of trading volume, lagging only the Bored Ape Yacht Club. The fantasy sports cards have outperformed top-tier collections like Doodles, Azuki, and Moonbirds. 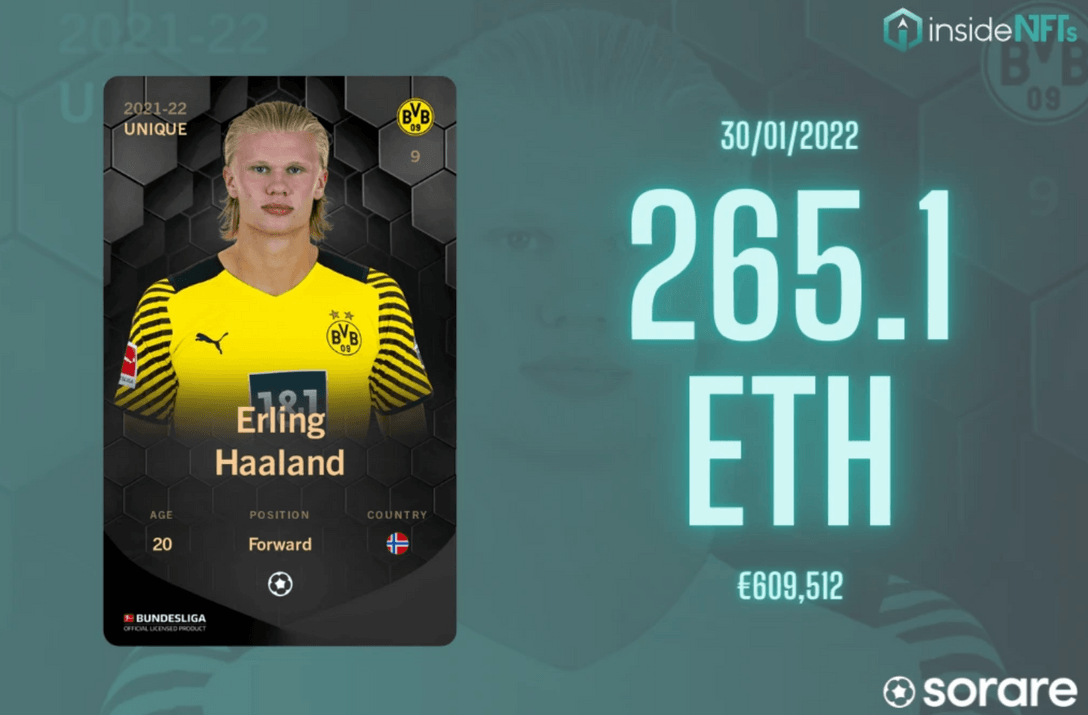 According to InsideNFTs, the highest Sorare sale to date is the Erling Haaland Unique Card, which sold for 265 ETH or 609,000 EUR last January. Mbappé follows with a price of 416,000 EUR, while Messi and Ronaldo’s cards sold for over 230,000 EUR each.

The Chiliz blockchain powers one of the most intriguing concepts in the sports world: fan tokens. Fan tokens are fungible utility tokens minted on Chiliz that allow sports fans to connect with their favorite sports club, team, or brand.

These governance activities occur in Socios.com, a platform powered by Chiliz. In 2022, Socios.com plans to launch over 500 polls. The team estimates that 17,000 Socios.com users will have received rewards and gifts related to their teams by the end of the year. 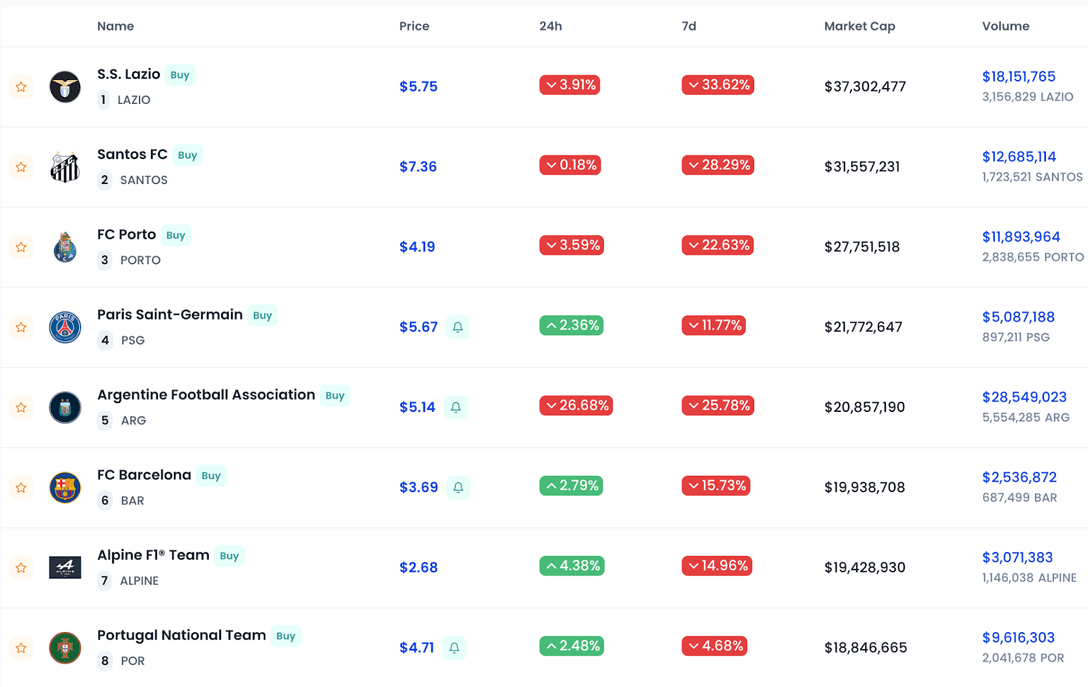 It is interesting to note that the results of the clubs can play a role in the value of the fan tokens. An example is the 25% drop in the price of the AFA token after Argentina lost 1-2 to Saudi Arabia in their debut match at the World Cup 2022 in Qatar.

CHZ is the digital currency that powers the Socios.com platform, and the newly launched CC2 – Chiliz testnet aims to become the first blockchain specializing in sports. They are creating bespoke infrastructure on which to build sport-specific Web3 experiences. During Anaheim, the testnet phase 1, CC2 will allow the creation of NFT and fan token smart contracts.

While Sorare is the leading dapp for fantasy sports, and Chiliz is building a decentralized ecosystem around fan tokens, Flow has become the standard in sports collectibles. This is one of the largest sport-related markets: Forbes estimates that between $12 and $24 billion was spent on sports memorabilia last year alone.

Like Sorare, Top Shot’s collectibles often appear among the most traded NFT collections. Flow’s basketball Moments have generated over $200 million in sales this year from 8.1 million trades. Top Shot is the seventh-most traded collection of all time, with $975 million.

To complement their NBA offer, Dapper Labs announced NFL All Day in September 2021. The American football ecosystem has been a success for the platform. So far, in 2022, NFL All Day has amassed over $35 million across more than one million trades. In addition to the NBA and NFL, Dapper Labs has partnered with the UFC and La Liga. 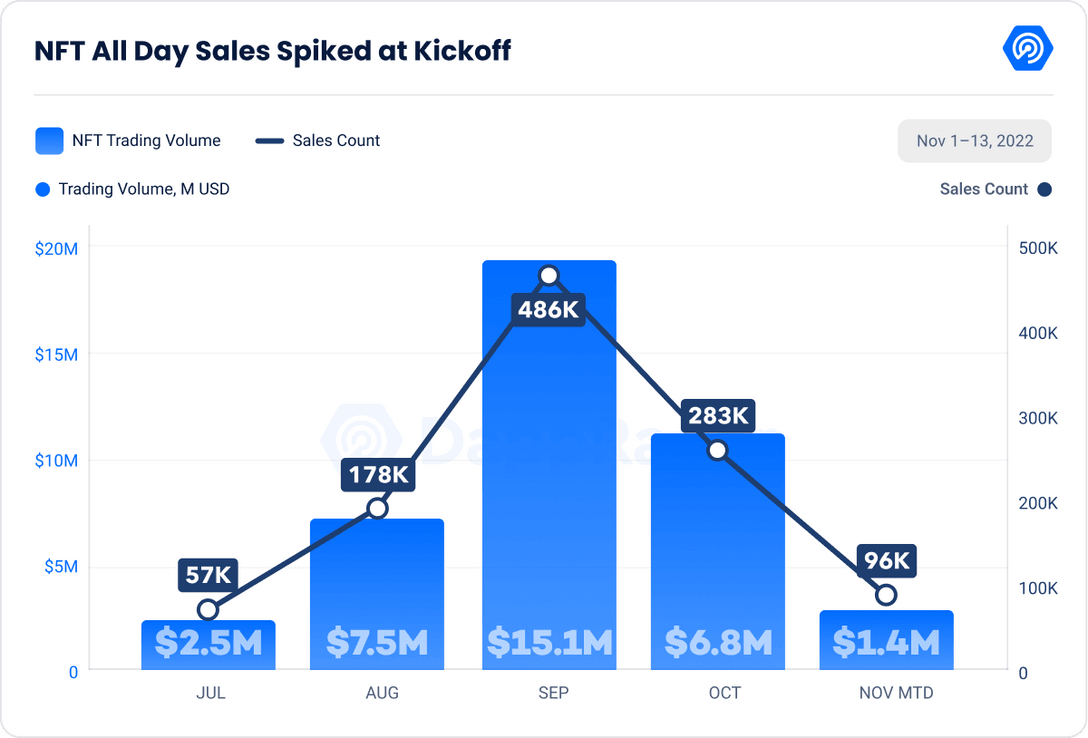 A key element in Dapper Labs’ success is reduced friction. While the Moments are stored on the blockchain, the Flow wallet is created simultaneously in the backend when creating an account linked to it. Also, anyone can buy a pack or purchase a Moment using a bank card, taking NFTs to a broader audience.

While this report intends to cover the most relevant sports dapps, it is necessary to assess the external economic conditions to understand the potential of sports in the dapp ecosystem.

According to Bloomberg, crypto-related brands have committed more than $2.4 billion to sports marketing in the past 18 months. F1 signed a massive $100 million deal with Crypto.com in the summer of 2021. More impressively, around 80% of the racing teams have at least one crypto partnership with the likes of Tezos, OKX, ByBit, and until three weeks ago, FTX. 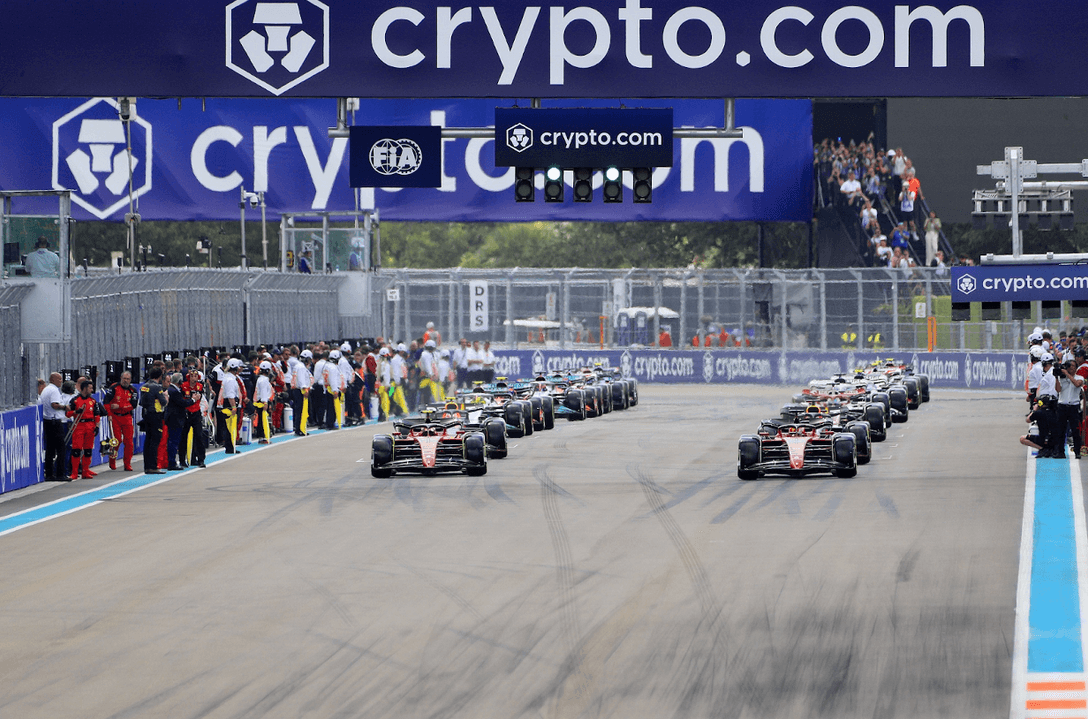 Coinbase has also become a familiar name for sports fans in the USA. Coinbase committed to spending almost $200 million over four years with the NBA. Last February, Coinbase launched a Super Bowl ad campaign. Although the results did not bring the expected results, they still achieved the critical goal of providing visibility to the Web3 sphere.

For good or for worse, FTX made one of the most visible marks in the sports world. In January 2021, FTX inked a 19-year, $135 million deal with Miami-Dade County for the naming rights to the home arena of the Miami Heat. Later that year, FTX signed a 10-year, $210 million contract with esports club Team SoloMid (TSM). After the latest events, both contracts were rescinded immediately.

Over the last decade, the esports industry has witnessed tremendous growth. In 2019, 100 million people worldwide watched the League of Legends tournament. It was broadcast in 19 different languages through 30 platforms, including ESPN. To put this into perspective, 130 million across the globe watched Super Bowl LV. 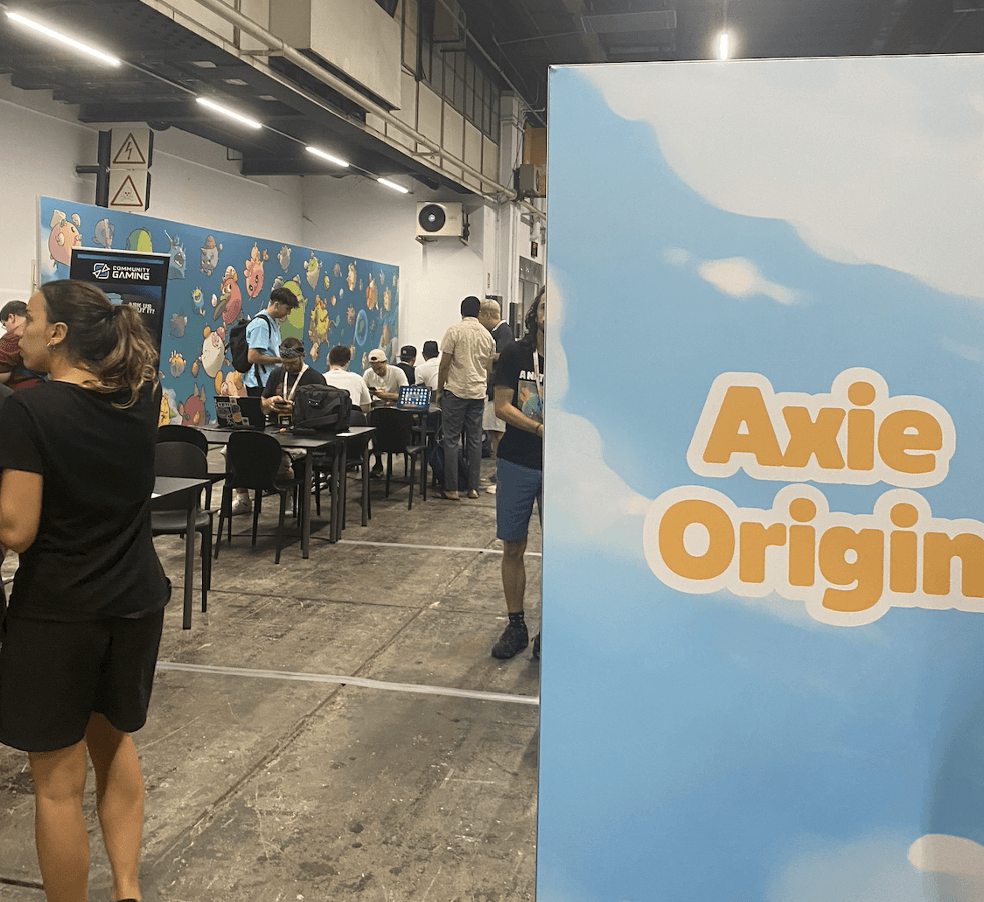 With a planet of 2.4 billion gamers, blockchain-based games have the potential to fuel the esports industry for years to come. In September, during AxieCon at Barcelona, Sky Mavis hosted three esports tournaments with a total pool prize of $1 million. Thanks to gaming guilds, and the next generation of blockchain games, including Splinterlands, Gods Unchained, multiple MMOs, and battle royales, it might be only a matter of time for Web3 games to break into the esports mainstream stage.

Take a look at these competitive blockchain games:

The sports industry has always incorporated high-end technologies. In the F1, teams employ cutting-edge technology in their cars. The Moneyball story showed how the A’s used advanced analytics to become a competitive team with a below-average roster. However, blockchain will shift the traditional sporting model by bringing a new way to connect fan bases to their favorite teams and players.

The potential of blockchain in the sports world is significant. Web3 esports aims to become a tool for mass adoption. Fan tokens disrupt how people interact with their favorite clubs by providing a true sense of belonging while rewarding token holders with real-life utility.

Sports dapps also take collectibles and fantasy games to the next level. Five years ago, it was unthinkable for anyone to own licensed footage of iconic moments from World Cups, the NFL, the NBA, the MLB, and many more. Sport NFTs enable a free market for individuals to trade collectibles in a free and secure manner. Meanwhile, blockchain-based fantasy games foster new players’ economies.

Finally, through web3 ecosystems like the Bored Ape Yacht Club, CryptoPunks or other NFT communities, fans can momentarily share the same social layers with renowned athletes like Curry, Tom Brady, and Serena Williams. The socio-elite barriers can be slightly blurred through a Discord server or exclusive events.

The rising presence of web3 in other forms, such as the WAGMI team or VaynerSports, signals that this might be only the beginning of sports decentralized models.

Twitter | Telegram | Instagram
Blockchain Games list | NFT Games lists | Crypto Games list | Play to Earn Games List
0
Bookmark
0
Like
Related articles
MIR4 Developer to Build Web3 Games in MetaGravity Metaverse
WEMADE has signed an MOU with MetaGravity to build a unique game experience and platform for people to connect to and enjoy. The alliance plans to bring the vision of Jang Hyun-Guk, CEO of WEMADE, to life.
0
ImmutableX (IMX) Co-founder Predicts Web3 Game With a Million Players in 2023
Web3 gaming platform ImmutableX is bullish on the gaming industry for the coming year. Furthermore, its IMX token has skyrocketed nearly 30% in a week.
0
EBay Hiring Multiple Web3 Roles Following NFT Marketplace Acquisition
According to recent LinkedIn job postings, the popular e-commerce site is seeking to bolster its Web3 team to support their NFT marketplace KnownOrigin.
0
Mexico's Atlante FC club will launch its NFT collection
El Atlante is another of the iconic clubs in Mexico that will join the trend of sports NFTs.
0
Club Pumas de México will launch NFT collection
The UNAM Pumas Club joins the limited edition NFT trend.
0
MetaMask launches free Web3 course for Brazilians
The most popular cryptocurrency wallet in the Ethereum ecosystem, MetaMask has launched a Web3 course for Brazilians. For free, all those interested can start learning about what is new on the internet.
0
'Calladita', the Catalan film financed with NFT, awarded at Sundance
'Calladita' marked in 2022 the milestone of becoming the first European film financed exclusively with the sale of its own frames in NFT ("non-fungible token" format) and, now, it has been awarded during this edition of the prestigious Sundance Film Festival.
0
This was the fashion collection in the metaverse presented by Intermoda in Mexico
Mexican designers presented a clothing collection on a catwalk that combined technologies such as augmented reality and the metaverse.
0
Miss Universo de El Salvador lanza colección NFTs
La Miss Universo ha lanzado una collección de NFTs en OpenSea que muestran a la salvadoreña llevando en este polémico traje.
0
Cardano-oriented GameFi Startup Joins Microsoft's Web3 Program
Paima Studios, a Cardano and Milkomeda-focused GameFi project, will take part in a new Web3 initiative from Microsoft, it has been revealed.
0
Reviews
Reply
Latest
No More
Discover what matters to you
No corresponding news is found