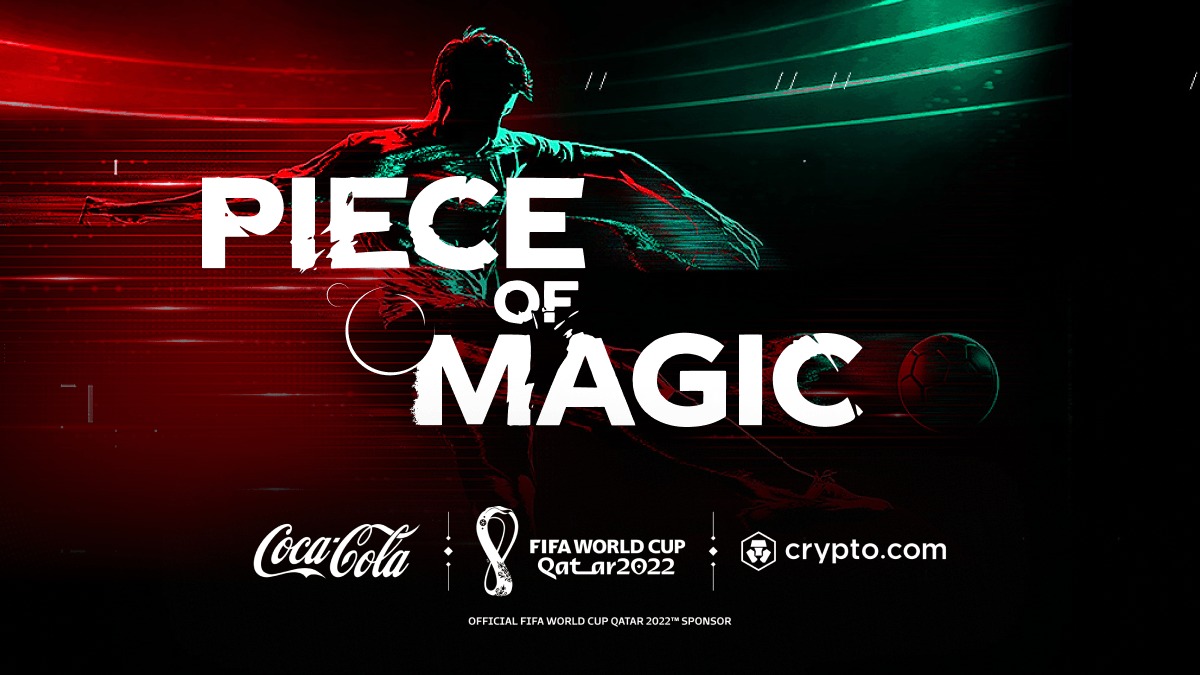 Riyadh, Saudi Arabia, December 5, 2022: The passion, power, and incredible talent of the best teams competing in the FIFA World Cup Qatar 2022™ will be captured forever by Coca-Cola and Crypto.com in a series of NFT artworks inspired by the unique ‘heatmaps’ created by each team’s on-field attacks, tackles, and winning goals.

Developed and hosted on the Crypto.com NFT platform, digital artist GMUNK (a leading NFT artist who has been working in the digital space for over 20 years including being the creative genius behind the sci-fi look of Hollywood films Tron: Legacy and Oblivion) has teamed up with Coca-Cola to create a collection of 10,000 unique NFTs generated by tracking the in-game movements of players in matches.

Combining digital art and football, this initiative is part of Coca-Cola and Crypto.com’s commitment to continue to deliver magical moments for fans during the World Cup.

The NFTs will be available to football fans globally after they sign-up for a Crypto.com NFT platform account. All eligible fans have to do is register on Coca-Cola’s Fanzone page and click on the NFT banner for a chance to own a Coca-Cola ‘Piece of Magic’ NFT inspired by FIFA World Cup Qatar 2022™ – the newest form of memorabilia that will live forever on the blockchain.

Artist Gmunk added: “At its core, Coca-Cola ‘Piece of Magic’ uses football data as our paintbrush, defining densities, behaviors and applications of color to shape and create an immersive piece of art that embraces the spirit of football and depicts a visual story unique to each match.”

Nazli Berberoglu, FIFA World Cup General Manager at The Coca-Cola Company: “The FIFA World Cup™ in Qatar is about bringing magical moments to life on and off the pitch for millions of fans from the region and beyond. This incredible collaboration with GMUNK will see 10,000 stunning and unique ‘Pieces of Magic’ in the form of NFTs available for fans to own forever.

“A superb talent who has consistently pushed the boundaries of art’s newest and most exciting field, GMUNK’s ‘heatmap’ inspired NFTs will capture the passion and determination shown by players during the World Cup – as they battle it out on the pitch, their athleticism and performance will inspire incredible works of digital art.”

“This year’s FIFA World Cup will be the first to leverage Web3 technology” said Steven Kalifowitz, Chief Marketing Officer at Crypto.com. “It’s a privilege to partner with Coca-Cola and GMUNK to memorialize these historical matches that will forever be captured on the blockchain. Together we are creating a completely new form of memorabilia.”

Coca-Cola Fan Zone is Coca-Cola’s digital hub for the FIFA World Cup Qatar 2022™.  It gives fans the opportunity to share emotions, excitement, games, and memories in support of this year’s FIFA World Cup™. The main features of the Coca-Cola Fan Zone include the Leaderboard, Promises, and Believers Predictions, creating a global competition that will put the fan’s knowledge to the test and allow them to interact with each other.

The Coca-Cola Company (NYSE: KO) is a total beverage company, offering over 500 brands to people in more than 200 countries.

Our company’s purpose is to refresh the world and make a difference and we’re constantly transforming our portfolio to bring innovative new products with something for everyone. We also seek to positively impact people’s lives, communities and the planet through our sustainability initiatives – from water replenishment to waste management, recycling to women empowerment initiatives while we continue to create a rewarding ecosystem for our employees, partners, consumers and customers.

For more information, visit us at Coca-Cola Middle East

GMUNK is a visionary whose creativity and innovation span a diverse range of mediums, and has established himself as one of the top visual design directors in the world. Utilizing a fusion of psychedelic themes and richly textured palettes, his signature style is enigmatic, atmospheric, and metaphysical – much like the Munky himself.

His ethos is driven by his desire to learn and be uncomfortable. He continuously seeks to apply his foundation in design to new mediums, with new collaborators. The results of these labors often take beautiful and unexpected forms as short films, installations, digital art exhibitions, commercials, music videos, title sequences and various applications of motion design.

GMUNK’s work has been exhibited at Christie’s, Sotheby’s and in fine-art galleries around the world. His early Flash and Motion Design work set the bar for experimentation in the medium and has been studied in schools internationally for over two decades. His projection-mapping opus BOX is one of the most viral short films ever made and won prestigious awards including the Cannes Grand Prix and Siggraph’s Best in Show. He produced one of the world’s most iconic image campaigns with the Microsoft Windows 10 desktop wallpaper, seen by over a billion people worldwide. He pioneered early Augmented Reality concepts by designing the holographic content in science-fiction pillars Tron: Legacy and Oblivion. His full-spectrum photography series InfraMunk has inspired an entire generation of artists and has been published worldwide in numerous print and online platforms including Fubiz, DesignBoom, and Engadget.

Founded in 2016, Crypto.com serves more than 70 million customers and is the world’s fastest growing global cryptocurrency platform. Our vision is simple: Cryptocurrency in Every Wallet™. Built on a foundation of security, privacy, and compliance, Crypto.com is committed to accelerating the adoption of cryptocurrency through innovation and empowering the next generation of builders, creators, and entrepreneurs to develop a fairer and more equitable digital ecosystem. Learn more at Crypto.com.