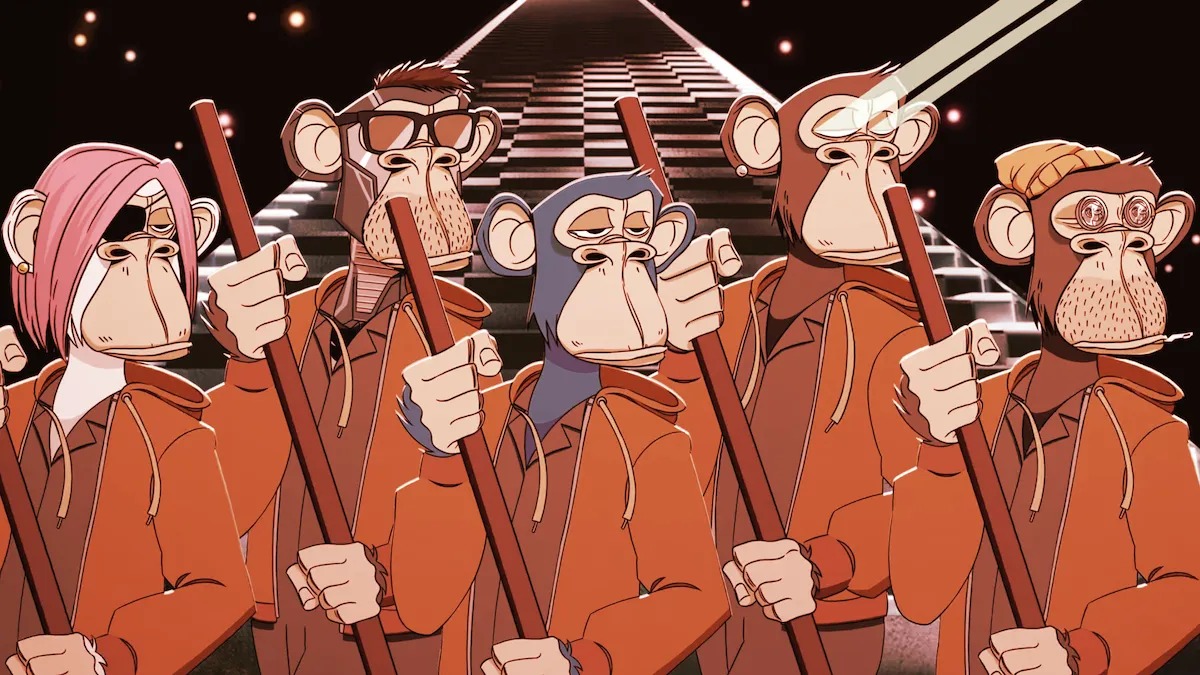 At the peak of Bored Ape Yacht Club hype earlier this year, cryptocurrency exchange Coinbase announced a trilogy of short films inspired by the NFT project during the run-up to the launch of the exchange's NFT marketplace. But after releasing the first entry in July, the company confirmed to Decrypt today that it has paused further production of the series.

“We are constantly evolving our content strategy and have decided to pause production of the remaining two films while we identify the best path forward for the creative,” a Coinbase spokesperson told Decrypt. “We will continue to focus on more immediate creative endeavors.”

The spokesperson declined to elaborate on the reasons for the production halt.

The Degen Trilogy had the blessing of Bored Ape Yacht Club creator Yuga Labs, and it was intended to feature various Bored Ape characters submitted by their respective owners. Coinbase’s terms stipulated that it would pay $10,000 worth of Bitcoin or ApeCoin to the owner of each chosen Ape, in exchange for licensing rights for the films.

The first installment was released in July via YouTube and social media platforms, with the five-minute CG-animated short introducing human characters on an ApeCoin-themed hunt in a skyscraper filled with “money zombies”—with only a handful of brief Bored Ape appearances.

It was widely criticized by the NFT community, with social media commenters knocking the confusing story, lengthy credits sequence, and lack of meaningful Bored Ape Yacht Club elements within the first entry.

The timing was also deemed unfortunate by some, as the film launched after Coinbase laid off about 1,100 people in June. “Imagine getting laid off by Coinbase [because] they couldn’t afford to pay you, and then they come out with this,” tweeted pseudonymous NFT artist, Hawkward.

Beyond layoffs, much had changed from April’s announcement to the July rollout. The once-flying NFT space was struggling mightily following May’s crypto market crash, Bored Apes had lost significant value in that same span, and Coinbase’s long-awaited NFT marketplace failed to gain traction after its launch.

Months later, the situation isn’t any better. NFT sales keep falling month after month, Bored Ape prices recently dropped below $60,000—down from a peak of $429,000 worth of ETH in April—and Coinbase’s stock price has crashed to all-time lows amid continued market struggles.

The Coinbase NFT marketplace has yielded only $7 million in trading volume since launching in April. That’s less than leading marketplace OpenSea typically manages in a single day. Coinbase Chief Product Officer Surojit Chatterjee, who had overseen the launch of the marketplace, departed the company in November ahead of additional layoffs.

In an August interview with journalist Laura Shin on the Unchained podcast, Chatterjee admitted that the first entry in the Degen Trilogy “probably didn’t hit the mark” for “some people,” and said that it was “something our marketing team tried.” Citing Coinbase’s buzzy Super Bowl ad this year, he added, “Some things are more successful than others.”

Despite falling Ethereum asset prices, the Bored Ape Yacht Club remains one of the best known and most successful NFT projects to date, racking up more than $2.5 billion in trading volume since its April 2021 mint. Yuga Labs has launched a series of follow-up NFT collections, including land deeds for the upcoming Otherside metaverse game.