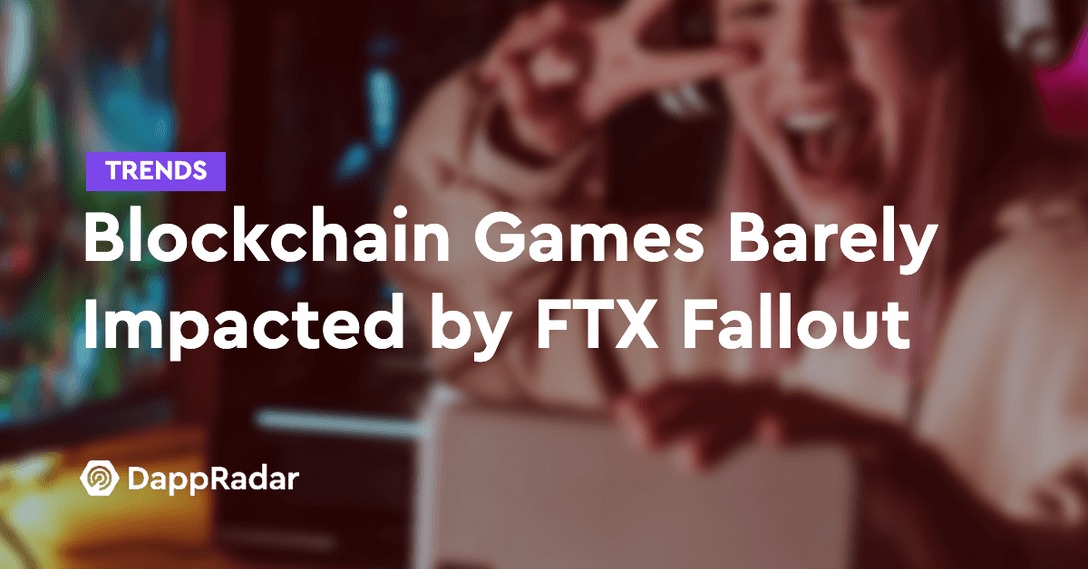 Looking from the side, most onlookers would think the crypto industry just imploded to a level that means no way back. In reality, however, the landscape is far brighter. The argument for total decentralization and true DeFi is as strong as ever while gamers keep playing and find use in the decentralized applications tracked by DappRadar.

In fact, throughout the current bear market cycle, blockchain games showed the highest levels of resistance. Moreover, the numbers show that dapps are being used, and blockchain technology can give more than speculative token investments to end users. Dapps are becoming the new apps, and that’s precisely what DappRadar has been counting on.

FTX collapse is not interesting

Why should they? Unless their tokens were held in FTX, which is unlikely given most blockchain games have internal marketplaces and staking options for their players, meaning that keeping tokens in a blockchain wallet is vital. Arguably, gamers learned the harsh lessons of – not your keys, not your crypto, without even realizing it.

The numbers dont lie, and while the world is engaged in pulling apart the story of a crypto billionaire turned man on the run, gamers are doing what they do best—playing games, earning rewards, and building out gateways for the mass adoption of blockchain.

Below we look at seven-day data for blockchain games ranked by the number of unique active wallets connecting to a dapp. The numbers are week over week, so it indicates an increase or decrease over seven days. 50% of the games show a positive uptick in usage, while others show minor downtrends, which are pretty standard when looking at week-over-week data. 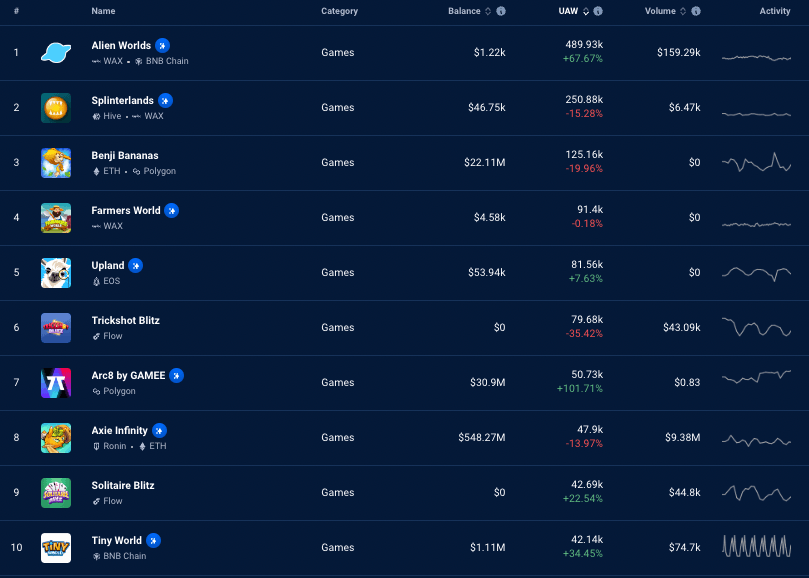 Another strong argument is that playing blockchain games at a time when tokens are down in value makes more sense, as anything collected today can be redeemed later when prices are more favorable.

What are people playing?

Lots of the biggest titles in the Web3 gaming space have seen increases in the number of unique active wallets (UAW) interacting with their dapps compared to last week.

These statistics only show a week of data, so we don’t have enough information to state that no dapps will be affected by what happened at FTX. Moreover, at this time, it’s heartening to see that many sections of the blockchain industry are still operating, growing, and creating.

You can read our ongoing analysis of which dapps are safe from the fallout of FTX here.

Everyone in Web3 has been affected in one way or another by events at FTX. At the very least, people’s confidence in the industry will have been shaken, and they’ll be wondering what these events could lead to.

Fortunately, Star Atlas CEO Michael Wagner has his sights set far into the future. Even though his game is built on Solana, he still believes that the network is the best place for his platform to grow. Meanwhile, The Sandbox, another huge player in the Web3 gaming and entertainment industry, just announced another partnership that promises to help the platform grow.

Twitter | Telegram | Instagram
Blockchain Games list | NFT Games lists | Crypto Games list | Play to Earn Games List
0
Bookmark
0
Like
Related articles
Gaming grows to 48% of all blockchain activity | DappRadar
Gaming grew to 48% of all blockchain activity during the month of January, up from 45% in December, according to market analysis firm DappRadar.
0
🔥 BSCStation Incubation Program - Powering Future Blockchain Innovation 🔥
As the industry continues to grow, it’s critical that we support the next generation of innovators and entrepreneurs who will shape the future of blockchain.
0
WEMADE and Metagravity Sign Strategic Alliance MOU to Collaborate on Blockchain Games for the Metaverse
WEMIX3.0 is a high-performance EVM-compatible open source protocol powered by SPoA(Stake-based Proof of Authority) consensus algorithm which is secured by 40 decentralized authority nodes operated by highly-qualified global partners as well as on-chain community DAO (Decentralized Autonomous Organization)
0
What are Bitcoin NFTs Ordinals and how do they work?
Past changes in the way Bitcoin works have made it cheaper to post fully on-chain NFTs on the blockchain. Ordinals has set up its own system to take advantage of this and associate satoshis with their own NFTs.
0
Ubisoft shutters Project Q – it’s mysterious blockchain game
Ubisoft’s blockchain forays face more setbacks as its mysterious game – Project Q – was among three of its now cancelled titles. Announced to a disappointed and sceptical audience, Project Q was originally slated as a multiplayer and team-based battle arena.
0
Bunny Riven ventures into the blockchain gaming world
Bunny Riven has announced that it has entered the blockchain gaming world with its gaming ecosystem. According to the team, the ecosystem will consist of an extended metaverse, Non-Fungible Tokens, GameFi and, as expected, P2P trading.
0
Oasys to be Listed on Leading Japanese Crypto Exchange, bitbank
Builds on its successful listings on OKX, Kucoin, Bybit, Gate, and Huobi
0
Aptos Labs CEO Says NFTs Will Push Boundaries of Previous Generation Blockchains
Mohammad Shaikh, co-founder of the layer 1 blockchain, predicts NFTs will be used as a means of payment and will also go mainstream via big brand partnerships.
0
Gaming unique active wallets grew 60% in 2022 – on-chain transactions up 37%
Wax, Hive, and BNB chain became the most popular gaming blockchains with 353,000, 234,000, and 136,000 daily UAWs, respectively
0
Blockchain Casual Golf Game "BIRDIE SHOT : Enjoy & Earn" opens for Global Pre-registration on Google Play
BIRDIE SHOT, which launched last October, is not only available for download on the game's official brand page, but also on the Google play Store, which will make the game accessible for more users.
0
Reviews
Reply
Latest
No More
Discover what matters to you
No corresponding news is found