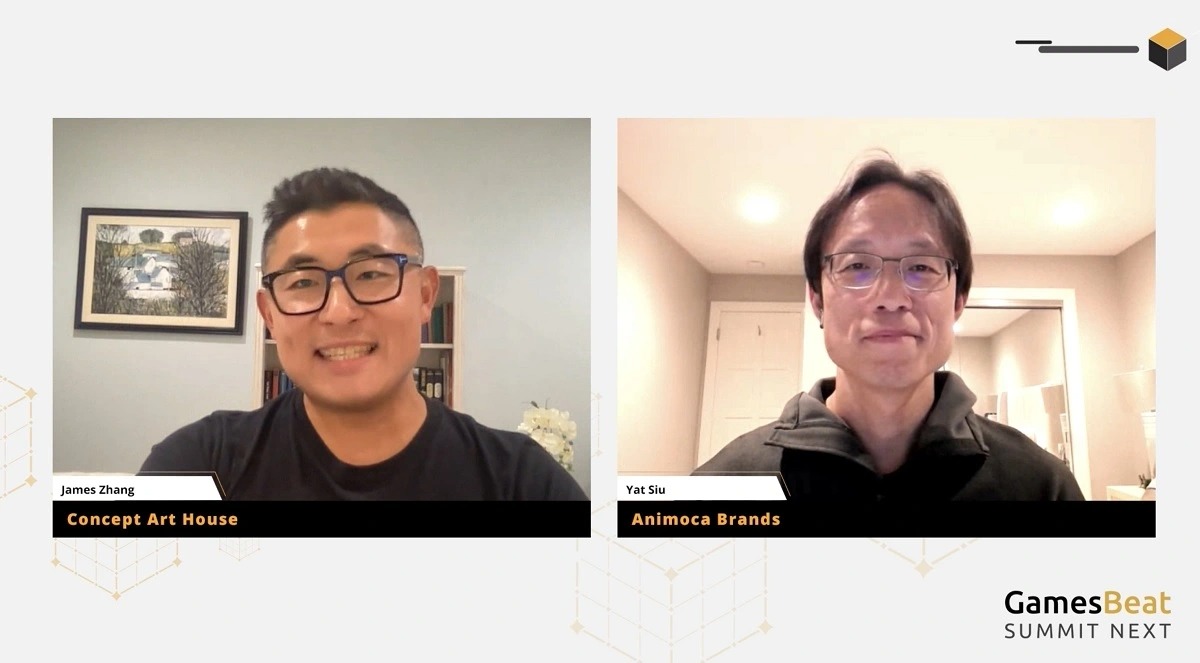 Yat Siu, executive chairman of Animoca Brands, helped open our GamesBeat Summit Next 2022 event by talking about the hurdles that blockchain games face in garnering more momentum. And while explaining that, he also noted how Asian game makers may have an advantage over those in the U.S. and Europe when it comes to blockchain and crypto games.

Siu tried to cut through both the hype and the negativity about how blockchain games will go mainstream and disrupt traditional games.

He was interviewed by James Zhang, CEO of Concept Art House, in an online fireside chat in a preview for our GamesBeat Summit Next 2022 event. He noted that CNBC dubbed Siu “Mr. Metaverse” for investing in hundreds of Web3 companies and driving the adoption of blockchain games.

Siu’s company has 380 startups in its portfolio, as Animoca Brands has a huge interest in NFT games. Zhang asked Siu how the companies will endure the crypto winter.

He noted how close to $3 billion has been invested in blockchain games this year already.

“It’s a great time to be a gamer,” he said. “Maybe the valuations aren’t as lofty as they were nine months ago. But you can still raise money if you’re a great studio with a great concept.”

He added, “I think of this as an economic development. The metaverse/Web3 is like the construction of a new nation. If you look at the growth of Korea, it’s one of the most wealthy nations in the world. But 30 to 40 years ago it was a military dictatorship. There are 3.4 billion people who play games who still have no ownership of the assets that they have built over time. If you believe that this is a better internet, that the DAOs and blockchain tokenization and Web3 and the open Metaverse are the future, then, bumps on the road aside for the long term, I think we’re going to be okay.”

Siu said the challenges are familiar, such as the onboarding process that makes it hard for neophytes to establish cryptocurrency accounts. People often don’t understand why they need a cryptocurrency wallet to play a blockchain game in the first place. Games companies have to integrate that if they want to enable crypto payment and ownership of crypto assets.

Some companies have opted for “Web 2.5” with a combination of crypto payments or fiat (like U.S. dollar) payments for non-fungible tokens (NFTs), making the onramp easier by holding the assets for you. But Siu said that doesn’t teach people about decentralization and what it means to actually own your assets, if you have someone else maintain and control them for you.

The bigger challenge is that gamers seem to accept blockchain games in the East, in Asia, but not so in the West.

“A strong vocal minority are very much rejecting the idea of — not ownership per se but — non fungible tokens and crypto at large. And so that’s another hurdle,” Siu said. “I think that really what Western game companies are genuinely struggling with, for the most part, which is that they can’t get the customers on board.”

Since Animoca Brands is a global company, it has been affected by this as much. But Siu said he feels for his Western counterparts. He noted that an early narrative from the critics was that free-to-play games abused a lot of players in the West, as games in the West catered to the idea of being merit based, as opposed to a “pay-to-win” games that sometimes thrived in Asia. The fear was that putting strong financial instruments in a game would distort the gameplay in favor of richer people.

“I think the larger narrative really is the fact that people, particularly young people, in America, for instance, have gone very anti-capitalist in their thinking,” Siu said. “If you look at the lens of the landscape of America politically, the fact that socialism has actually a strong political agenda today. But it was even unthinkable perhaps five to seven years ago.”

And so groups are viewing crypto as a tool for the rich and that crypto games are extremely expensive to start playing. They’re also viewed as wells to scam you out of your money. Politically, Siu believes that the environment is different in Asia where young democracies are accepting capitalism and property rights. It probably also has to do with the fact that many of the games so far haven’t been that fun, and if there are big-budget blockchain games in the works, they haven’t arrived yet.

“I think that’s the opportunity,” he said. “If you remember last year, many of the biggest game companies, including companies like EA and of course our good friends at Ubisoft, and so on, have always said they were going to go into this space. And for the most part, it’s been a full-scale retreat this year.”

In China, the government banned everything related to crypto, and that has stopped those games from getting traction there as well. But Siu said that has created an opportunity for smaller startups in the blockchain space to grab footholds in the market before the large corporate giants arrive.

“I think this is the beginning of a really interesting redrawing of the world of digital entertainment and digital property rights,” Siu said.

Siu believes that South Korea is the most active blockchain gaming market, where every major game company is pursuing a blockchain strategy, including companies such as Netmarble, Com2Us, Wemade, Nexon and others.

“From a national sense, I would say Korea is probably the most active,” Siu said. “I think every single major game company in Korea is trying to do something there in Web3.”

“You can definitely see a trend where Asia is driving and moving forward,” Siu said.

In the U.S., however, strict gambling laws in the state of Washington have probably stymied Microsoft and Valve (owner of Steam) from moving into rewards-based blockchain games, and other companies have to be careful about whether their crypto tokens could be considered regulated securities under federal law.

“In the U.S., certainly, you can’t live a day in Web3 games without looking a the latest decisions and explorations by the SEC (Securities and Exchange Commission,” Zhang said.

Yuga Labs, operator of the Bored Ape Yacht Club franchise, has tangled with the SEC and Kim Kardashian had to pay a big fine for promoting cryptocurrency without disclosing she was paid to do so.

“So if digital ownership is the power and the promise of Web3, how should NFTs and tokens be designed to not be considered securities but still provide value and ownership?” Zhang asked.

Siu noted that different countries are taking different approaches. He noted many of the regulatory investigations have focused on the area of fungible tokens, where each token is exactly like another, much like with national currencies, or fiat.

“The main it really comes down to is what is the reason you’re buying the asset for,” Siu said. “And if it’s a utility, right? So, from our perspective anyway, if you launch a game item, and you can use it inside the game and you have clear utility, which I think is happening much more these days anyway, then it’s pretty obvious that this should not be a security.”

Games for the unbanked

Siu noted how NFT games have been good for countries that have lower per capital gross domestic product, as the ability to earn NFTs and then sell them on a secondary market can be a source of income. He noted some games focus on financial inclusion, where players who don’t have bank accounts can find ways to play, sometimes through player guilds like Yield Guild Games.

“It’s a fine balance that one has to trade, but generally speaking I think we’ll map the right path,” Siu said.

He noted that Hong Kong will come up with a digital asset policy that provides clarity. Siu said we can see a shift, where last year it was about play-to-earn games like Axie Infinity, and now there is a pivot to talking about how fun a game is.

He said game developers should be aware that people play for different motivations, whether to make money or for fun. But players who emphasize one of these motivations should not dismiss games that cater to the other one. And while some may see play-to-earn as an indentured servitude model, others might see it as a path to economic freedom.

“The ownership paradigm is, is a more critically important one, when people themselves start to engage in a way where they wish to make money from that ownership,” Siu said.

Siu noted that the model around blockchain is interesting in comparison to free to play, where a very high percentage of the revenue comes from a very small percentage of players.

“What tokenization does is it enables a way in which you can measure the value of the network effect in which the free people play, and then whether they choose to cash out or reinvest to new equity or assets,” Siu said.

He also noted that decentralization from Web3 means that fewer of the profits go toward the big platform companies. That money doesn’t get plowed back into game developers and back into making better games for players. If you take the user acquisition money and just give it to the gamer instead, that gamer will likely put it back into the game economy. It is a redistribution of wealth.

“Even if they only put in back 10%, or 20%, it is still higher than what they would do otherwise,” he said. “It is a much healthier ecosystem. It’actually a realignment of incentives.”

Zhang asked how to protect digital ownership from hackers. Siu said a responsibility comes with ownership, and education is the key to that. You need an electorate that compels regulators to come up with the right policies and legal protections, not to mention better security. He also noted that NFTs could come with built-in security where, if stolen, they no longer have the same utility.

“As an industry, we need to get together and probably there needs to be some regulation around this,” Siu said. “Is there a reclaim button? Does someone have the ability to reclaim ownership?”