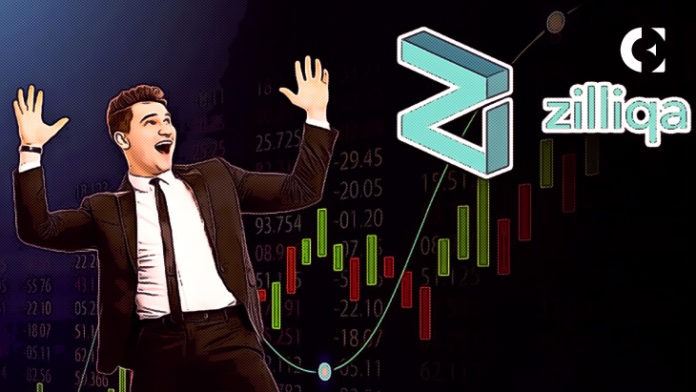 Zilliqa blockchain, the issuer of the ZIL token, is pushing crypto adoption with a new product launch. The protocol announced on its Twitter page early today that its shooter game, WEB3WAR, will premiere in five days on the Zilliqa gaming ecosystem.

The game encompasses many features, including the ability to lock on targets with far greater precision, thanks to the “thermal scopes and markers.” Additionally, the protocol will open sales for its Web3 consoles in the first quarter of 2023.

Last week, prototype images of the Zilliqa Web3 gaming console surfaced on Twitter, with a user saying it looks similar to one OG Xbox playbook did previously. According to Zilliqa, the console is user-friendly and would reward players for completing gaming objectives, quests, and chores by mining its native currency, ZIL.

In a community poll by the popular market tracker, CoinMarketCap, crypto enthusiasts are confident that the price of ZIL will rise to its previous all-time high (ATH) of $0.2563, given the new product launch. A user said:

“THE GAMING CONSOLE THEY WILL BE RELEASING ALONG WITH ALL THAT IS OFFERED FROM THE METAPOLIS GIVES THIS COIN [ZIL] A GOOD CHANCE TO AT LEAST CLIMB BACK TO ITS ALL-TIME HIGH IF NOT BREAK A DOLLAR.

Zilliqa is a layer one blockchain built for fast transactions through sharding. It currently has 15 gaming projects. The ZIL token is one of the top 100 cryptocurrencies, with a market of nearly half a million dollars. Its 24 hours trading volume is up by 11%, although its value has dropped by 1.74% in the last seven days.

Twitter | Telegram | Instagram
Blockchain Games list | NFT Games lists | Crypto Games list | Play to Earn Games List
0
Bookmark
0
Like
Related articles
Animoca and GameFi Ventures Lead Wanderers’ $2 Million Seed Funding Round
They aim to release a game and expand their music and entertainment IP.
0
GameFi cryptos will be the next to explode— here is why!
The growth of the GameFi industry has produced innumerable gaming crypto projects that have quadrupled the chances of acquiring massive rewards in the ecosystem. Unlike their forebears, these new gaming crypto projects assert that players can indulge in pleasure while still making profits.
0
Aeria Studio Canada partners with Ready Games to bring Web3 titles to Android
Aeria Games is joining the push to Web3 and making these titles more accessible by re-releasing them on the Android mobile operating system.
0
Polkastarter to Host Web 3.0 Game Awards Show, Nominates Over 200 Games
Web3 Gaming Launchpad Polkastarter Gaming has announced it is holding its first annual game awards show, GAM3, on December 15th.
0
GameFi is revolutionising global NFT market. Here’s how crypto regulations could shape it
GameFi is the intersection of gaming and finance in an environment driven by use of blockchain, non-fungible tokens and smart contracts.
0
Web3 Gaming Sucks: The Struggle With User Experience
Judging by Reddit’s success, conversion to Web3 gaming by stealth may be the best path to adoption.
0
Game7 launches $100M grant program to accelerate Web3 gaming
The program will enable developers to build tools, create education programs, host events, and perform research to make the Web3 video game industry more diverse and accessible.
0
Sports Report – FIFA World Cup introduces Web3 to 5 billion people
During the FIFA Fan Festival, VISA will present football fans with a new hybrid experience that includes an NFT auction and an immersive experience allowing World Cup attendees to create their own NFTs on the Cronos blockchain.
0
5 Ways Web3 Games Are Celebrating Thanksgiving
Crypto gaming is ushering in a new era of brand-consumer relationships and virtual events thanks to Web3 technology. Since their inception, crypto games have been at the forefront of digital events, hosting some of the most sought-after and exciting events.
0
Web3 Gam3 Awards 2022 nominees released with Big Time up for 6 awards
The full list of nominees for the Gam3 Awards includes a star studded list of the best web3 gaming has to offer
0